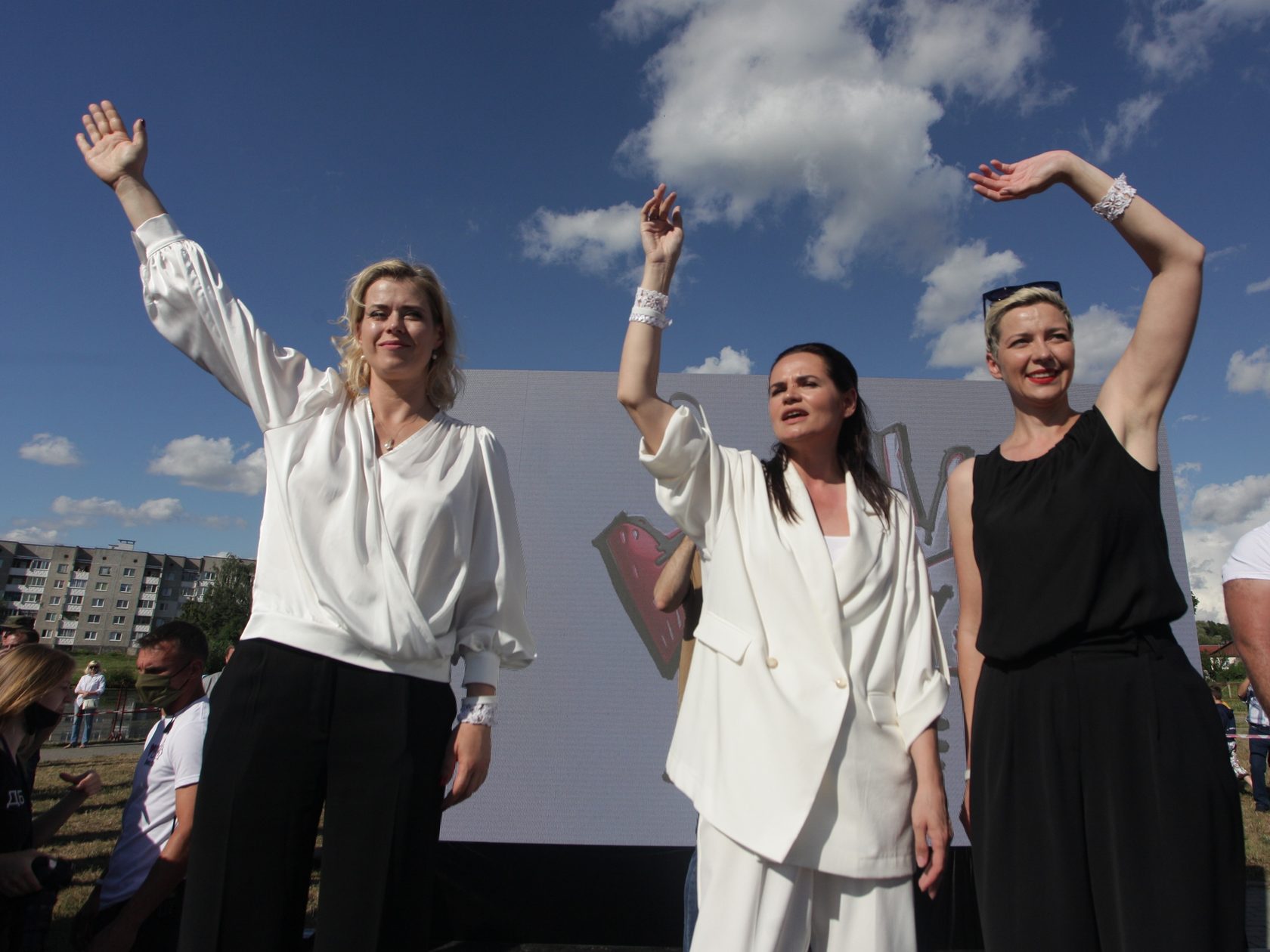 Before 2020, few people outside Belarus had heard of Sviatlana Tsikhanouskaya. “I had the life of a usual mum and wife,” she told the media, “nothing special, nothing interesting”. Now, she is widely known as the Belarusian political candidate who was robbed of her election win and driven into exile.

Coverage of Tsikhanouskaya’s story within the international media has focused on three key injustices surrounding her campaign. The first is the arrest of her husband, the pro-democracy blogger Sergei Tsikhanousky, in May, two days after he announced his standing in the Belarus presidential election – the event that prompted his wife to stand in his place. We also hear about the election results, which declared incumbent President Alexander Lukashenko to have won by 80.10% of the vote to Tsikhanouskaya’s 10.12% – results that have been challenged as fraudulent and discounted by several international governments. Thirdly, we hear about the harassment – often sexist and violent – that Tsikhanouskaya endured throughout her campaign, as well as the threat to her life announced by the KGB of Belarus in August. What is understood less, however, is the role the Russian-state media played in discrediting Tsikhanouskaya.

“A random person in politics”, “unemployed”, “narrow-minded,” and merely a “housewife” – a Press Club Belarus analysis of several key Russian state-funded media outlets – including Soloviev live, VestiRU, RussiaTV, and Russia Today – sheds light on the language used to describe Sviatlana Tsikhanouskaya throughout 2020. Understanding the discreditation strategies deployed by the Kremlin propaganda machine is key to appreciating the influence exerted on Belarusian infospace, and the wedge it seeks to drive between the protests and the wider Belarusian public.

Prior to the registration of the candidates, Sviatlana Tsikhanouskaya did not stand out in Russian state reporting. She was mentioned as one of many possible candidates. However, once several contenders backed Tsikhanouskaya – their own attempts to register as presidential candidates having been refused, things quickly changed. A large gathering was held in Minsk in support of her candidacy. An estimated 34,000 people came to show their support – a turnout that could not be ignored by the Russian media, who began describing Tsikhanouskaya as “the main rival” to President Lukashenko, before emphasising her lack of prior political experience and major personal or business achievements, her low income, and the fact that her husband was in jail.

“The candidate Sviatlana Tsikhanouskaya indicated her 2019 income amounted to 15.7 thousand rubles. This is a child allowance, an allowance for caring for a disabled child, a social pension for a disabled child. She has no real estate property and no car,” reported Vesti.ru

Commentators often speculated that Tsikhanouskaya lacked political ambition, that she had been forced to run for the presidency, or stressed the fact that she was the leading opposition candidate due to chance, despite attracting huge crowds at campaign events. Russian state media channels such as Vesti 1 continued to project the ‘primitive housewife’ image, despite the fact that the evidence did not fit that narrative – such as Tsikhanouskaya’s knowledge of English (before running in the election, she worked as a teacher and interpreter): “The [U.S.] Deputy Secretary of State is in a good mood and clearly understands what Tsikhanouskaya is saying to him. It is not unlikely that they could communicate in Russian – Biegun speaks it,” Vesti 1 reported. Later, Russia 1 and VestiRU repeated wording from the same source: “The opposition candidate for the Belarusian presidency Tikhanovskaya suddenly started speaking pretend English.”

Alongside this belittling language were narratives constructed around Tsikhanouskaya’s apparent cautiousness and cowardice. Suggesting Tsikhanouskaya hid in the opposition headquarters building, and then later left for Lithuania due to her weakness. Concerns for her own, or her children’s personal safety were portrayed as cowardice. “Tsikhanouskaya, worrying about her own safety, left her apartment in Minsk and stayed at the headquarters surrounded by the candidates,” reported one outlet. “She will not take part in protest campaigns in order to avoid provocations,” reported another. “At Sviatlana Tsikhanouskaya’s headquarters [...] all windows and doors were locked and they fear detention.”

On top of this, state media hypocritically emphasised Belarusian authorities' concern for the safety of the rival candidate, despite the fact that the state security apparatus was itself threatening Tsikhanouskaya. In August, when security services had intercepted a message threatening an assassination attempt on Tsikhanouskaya, they “provided [the opposition headquarters] with an entourage of 120 trained officers” as a precaution. Ultimately, Tsikhanouskaya’s departure from Belarus was used to underscore her insecurity “Sviatlana Tsikhanouskaya, who left Minsk for Lithuania, called on people to take care of themselves,” reported Ria Novosti, while Izvestia reported that “She noted that she would return to Belarus as soon as she feels safe.”

After Tsikhanouskaya left Belarus, she posted a video to her followers via her official YouTube channel. She explained that she had independently left Belarus but did not explain why. State-owned media in Russia drew attention to a perceived admission of weakness in the video message. Tsikhanouskaya said: “God forbid you ever have to face the choice that I faced […]. I have remained the weak woman I was originally.”


A mouthpiece of the West

While these attacks focused on Tsikhanouskaya’s capabilities and personal life, Belarus Press Club’s analysis of Russian state media also uncovered the way she is routinely positioned as a political mouthpiece of the West. When Russian political scientist Dmitry Kulikov appeared as a guest on the program Evening with Vladimir Soloviev, he said “Sviatlana Tsikhanouskaya is the element of a Western special operation. She is a talking suitcase record player, into which a disc can be placed and played.” Later on, he asked the rhetorical question: “Are there no boundaries to the ‘polonization’ of Belarus?”

This appearance sums up the narrative built around Tsikhanouskaya’s campaign. International relations were repeatedly the focus of speculation that she was working on behalf of foreign agents, and were emphasised in a negative light. Several news stories focused on the symbolic transfer of keys by the Polish Prime Minister Mateusz Morawiecki to the new Belarus center in Warsaw, and Tsikhanouskaya's words of appreciation to Poland for the country’s “moral and financial assistance”.

The topic of Tsikhanouskaya’s diplomacy was also seized upon and twisted by the Belarusian Ministry of Internal Affairs, who published a scathing statement: “The supposed participation of ex-candidate for the presidency Sviatlana Tsikhanouskaya in the meeting of the EU Foreign Ministers […] [is] open interference in internal affairs.” His statement aligned closely with the remarks made by Maria Zakharova, spokesperson for the Russian Ministry of Foreign Affairs “The planned participation of the former candidate for the presidency of Belarus Sviatlana Tsikhanouskaya in [...] the EU meeting in Brussels [...] will be more evidence of the European Union's shift away from earlier statements about the absence of geopolitics in the situation with Belarus and any parallels with the February 2014 scenario in Ukraine.”

Perhaps the most damning indictment of Tsikhanouskaya’s international politics came in the form of the reports around her Cooperation Council. Established in August, it was created following the contested elections as a network for those who wanted to support Tsikhanouskaya in campaigning for a democratic transfer of power. It was quickly filled by 600 members. Russian state-owned media responded by suggesting that the Coordination Council was a Western tool intended to destabilise the country and finance the opposition. Russian state media repeatedly raised doubts regarding the Council's right to act and make decisions. It was emphasised that six out of the seven members of the Council’s Presidium were currently either detained or abroad “A criminal case was initiated against the members of the Coordination Council, which included supporters of Tikhanovskaya, under the charge ‘attempt to seize power’,” wrote Vesti.ru. Attention was also drawn to how the Council was formed in the first place. As Vesti.ru reported “Can the Opposition Coordination Council consider itself legitimate, if it appointed itself? And now it is proposed to vote for candidates post factum. On the Internet.”

Finally, Tsikhanouskaya’s calls for sanctions to be imposed on the Belarusian government were held up as an example of how her election would throw Belarus into economic disrepair. Both her calls for sanctions and cooperation with foreign governments were seen as a gateway for damaging Western interventions and ideologies. “Europe is also preparing to adopt devastating sanctions against Belarus, which will be followed by the demand for gay pride parades in the standard package of support for democracy [...], and NATO has become more active at the Belarus borders,” as Vesti.ru put it.

Notably, the emphasis on her relationships across Europe were positioned in sharp contrast to a lack of communication between Tsikhanouskaya and the Russian authorities. When she gave an interview on Euronews in which she called Russia a country “with which we are on friendly terms”, the Russian state owned media outlet Vesti.ru concluded that “Tsikhanouskaya is flirting with Putin”.

A fork in the road

Overall, Russian-owned state media have portrayed Belarus as being at a fork in the road – the country who could either choose a destructive route, which would involve “walking down the streets demanding instant changes in Ukrainian style” – this pathway is associated with European support and the “completely unprepared […] tongue-tied Sviatlana Tsikhanouskaya.” Alternatively, Belarus could choose a constructive path, associated with Lukashenko and the building of “a democratic state with a strong economy, deeply integrated with the Russian economy.”

Lukashenko was not portrayed in a wholly positive light in state owned media. He was positioned as successful only in conjunction with Russia’s assistance, suggesting that, in absence of Russian support, a weak Lukashenko would lose to an even weaker Tsikhanouskaya. Russian state media downplayed Belarus’ status as an independent power – whoever the winner of the election – and emphasized that Lukashenko was looking to Russia for help. Against this backdrop, Russia is represented to a domestic audience as a powerful force that does not directly intervene, but can play a stabilising role.

Three months on from the breakout of protests in Belarus, little has changed within the country. Lukashenko holds power, and protesters still call for reform. The EU, however, have placed Lukeshenko, and his son Viktor, a security advisor, on their sanctions list of Belarus officials, which at the time of writing amounts to 59 officials. These sanctions largely came about due to the calls made by Tsikhanouskaya. Disinformation in Belarus and Russia remains pervasive, designed to uphold the repression of democracy. Spreading awareness about this disinformation is one way to fight it, along with counter messaging. This is the goal of Press Club Belarus. One thing is true: the country is at a fork in the road. Appetite for democracy and a new leader has never been greater but international support is required to make this happen.