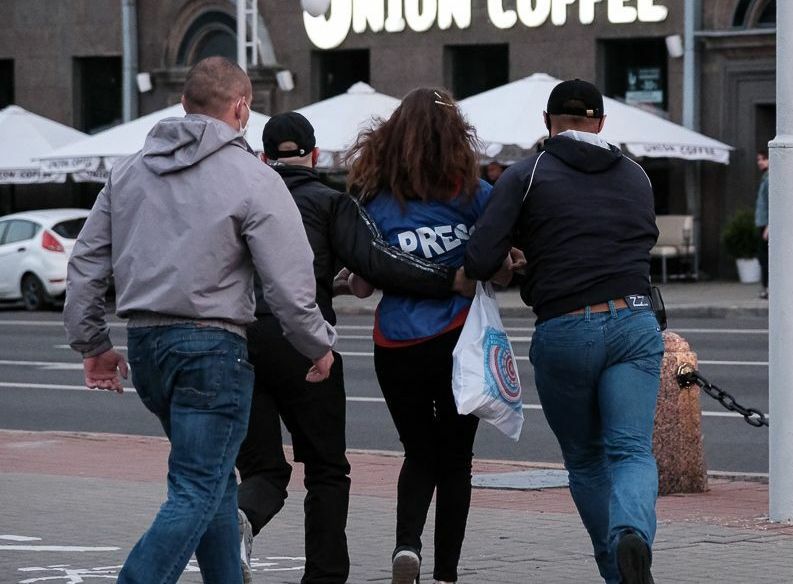 Not since the days of the Belarusian Soviet Socialist Republic has it been so dangerous to be a journalist or civic activist in Belarus, where Alexander Lukashenka’s regime is attempting to eliminate independent media and civil society.

So far this year, Belarusian security forces have raided and searched more than 100 media premises and homes of journalists and editors, detaining at least 87 media workers, of which 29 are still in jail, with 21 facing administrative or criminal charges.

On July 8th, officials detained reporters from Nasha Niva, one of the country’s oldest weekly newspapers, raided its offices and blocked the news outlet’s website.

According to the Viasna human rights centre, Nasha Niva reporters were questioned and then released under a gagging order, banning them from making any public comment. The Belarusian Association of Journalists (BAJ) reports that editor in chief Egor Martsinovich, editors Andrey Skurko and Andrey Dynko, and chief accountant Olga Rakovich remain in custody, suspected of “organising or preparing and participating in activities that violate public order and planning or organising mass riots.” Martsinovich appears to have suffered head trauma during his arrest and was seen departing in an ambulance summoned by the authorities.

On July 14th, Viasna itself became a target. As part of a coordinated crackdown on human rights organisations across at least ten cities, security forces raided their Minsk office, detaining CEO Ales Bialiatski, vice-chair, Valentin Stefanovich and at least seven other contributors and family members.

Also subjected to searches and seizures were the Belarusian Helsinki Committee, the Belarusian Association of Journalists, Human Constanta, Lawtrend, Gender Perspectives, the home of the head of the Belarus Writers Union, several political parties, and a number of journalists.

As a member of the European Association of Journalists and the International Association of Journalists, BAJ keeps these organisations informed about the media climate in Belarus and “We also keep the UN Special Procedures Office (human rights) and the Organization for Security and Cooperation in Europe (OSCE) Special Representative on Freedom of the Media informed and we receive support from these bodies,”

The regime will probably force her and her colleagues to leave the country, but she stressed that such an eventuality will not prevent them from continuing to do their job.

Hrodna.life editor, Iryna Novik, who was briefly detained in late May, said some colleagues have already left the country and others work from home under tremendous psychological pressure, “waiting for a knock at the door”. Meanwhile, advertisers are cancelling deals leading to an economic crisis for such publications.

Aliaksandra Pushkina of TUT.BY, which has restarted work in exile as Zerkalo.io, reported that at a closed session of the Economic Court of Minsk on July 7th, the decision of the extra-judicial commission to classify the materials of the TUT.BY portal as extremist was upheld. The regime has managed to destroy their team of 270 people, block their bank accounts and 15 employees of TUT.BY and its partner organisations remain behind bars.

In the last week, the regime has also charged Andrei Aliaksandrau, the founder and chief editor of the Belaruski Zhurnal news website, with treason; he faces up to 15 years in jail if convicted. The New York based Committee to Protect Journalists (CPJ), which promotes press freedom worldwide called on Belarusian authorities to “immediately release journalist Andrei Aliaksandrau, drop all charges against him, and ensure that journalists can work freely and without fear.”

The most bizarre and high profile case of media persecution perpetrated by the Lukashenka regime remains the case of Roman Protasevich, the Belarusian activist and former editor in chief of Nexta, a Telegram based media outlet that extensively covered Lukashenka’s crackdown on civil society after the 2020 presidential election.

In May, a Belarusian fighter jet forced a passenger plane en route from Greece to Lithuania to land in Minsk to enable the arrest of Protasevich and his Russian girlfriend. Since then, he has been paraded on state TV to deliver scripted pro-regime and anti-opposition talking points, released to house arrest, and a new Twitter account has appeared in his name. Meanwhile, the geopolitical and economic consequences of such blatant disregard for international law cost the Belarusian economy millions of dollars every month in the form of retaliatory trade sanctions and travel embargoes.